Save room for dessert! Let's have some fun with our meal... choose as many activities as you like to round out your household's faith adventure this month.

saints of the Month

St. John Paul II - October 22
When I forgive other people, I am like St. John Paul II
​St. John Paul II was born Karol Wojtyla in 1920 in a small town in Poland. He worked many jobs before becoming a priest. He became Pope in 1978. In his 27 years as Pope, he did many important things, like establishing World Youth Day, visiting 124 countries, writing many books and letters, and building friendships with other religions. In 1981, he was shot. He visited his would-be killer in prison and forgave him. Pope John Paul II died in 2005 and became a saint in 2014.

October 4, 1979 Pope John Paul II visited Iowa and celebrated Mass at Living History Farms with more than 350,000 people.  Ss. John & Paul Parish was the first new parish established in the diocese after that papal visit.  In light of this, both the parish name and logo were chosen as reminders of the visit by the pope.
​
Find our more about the only Pope to have visited Iowa.
Pope John Paul II Biography 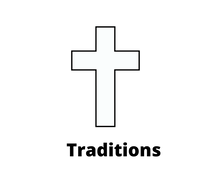 The Creed is the prayer we prayer at Mass each week that professes what we believe as Catholics.

All Saints Day is an important day in which we Catholics celebrate the deceased loved ones who have gone before us. We remember them, pray for them, and ask their prayers for us. During the entire month of November, we remember the Communion of Saints - those who are still part of the Body of Christ with us, and those on the other side of death. We remember both those who have officially been named saints by the Church and those unofficial saints who have gone to God. Have you ever wondered what the connection is between All Saints Day and Halloween? You can find out more using the links below.

The link to a Halloween prayer for families leads you to a familiar face. The prayer, and the blog post that accompanies it, were written by Kathy Hendricks. Kathy was one of our presenters last year for Faith Formation L!VE and Adult Faith Formation L!VE. Enjoy her reflections on Halloween, All Saints, and All Souls!